What should students learn in the 21st Century ? This conference will
discuss top-level changes in the Math school curriculum, in terms of
what topics and branches should be added, and just as crucially, what
should be removed.
Rationale:
In the 21st century, humanity is facing severe difficulties at the societal (global warming, financial stresses), economic (globalization, innovation) and personal levels (employability, happiness). Technology’s exponential growth is rapidly compounding the problems via automation and off-shoring, which are producing social disruptions. Education is falling behind the curve, as it did during the Industrial Revolution. The last profound changes to curriculum were effected in the late 1800’s as a response to the sudden growth in societal and human capital needs. As the world of the 21st century bears little resemblance to that of the 19th century, education curricula are overdue for a major redesign.This is all the more true in Science/Technology/Engineering/Math (STEM), where demand is outpacing supply worldwide. Math being the foundation of STEM, and in turn innovation, the situation requires urgent attention. Beyond STEM professions, we are seeing very significant innumeracy in a very large segment of the population, which has severe consequences on the ability to understand the world’s difficulties.This event is sponsored by the Center for Curriculum Redesign, OECD,
Confederation of Swedish Enterprise and the generous support of the Bill
and Melinda Gates Foundation, the Henri Moser Foundation, and the
Nellie Mae Education Foundation.
The Vedic Maths Forum India 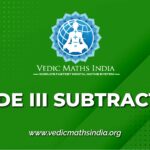