That’s not the way 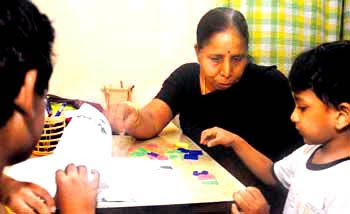 That’s not the way

Focusing only on the procedure and not the process means we view children as machines instead of complex, feeling, thinking and enriching humans

I got distinction in Maths. Don’t ask me how. I just did it. But I can’t calculate to save my life!” I meet many people who got great marks in a particular subject they neither liked nor understood. These people cracked an exam because they could memorise the procedures.

As a society we are caught up in procedures. We feel reassured when procedures are laid down. More the procedures, more is the value accorded, as the system appears to be foolproof. An outcome of the Industrial revolution, there is no doubt that procedures are necessary to be followed for a system to function, for machines to be operated. But in the education system, the procedure has been given more importance than the process. Why? Because procedures are easier and being visible, they reassure both parents and educators.

Procedures are imposed from outside whereas process is developed from within. Procedures to solve sums or formulae are given to the students. They remain the same and all students need to learn them.

The process, on the other hand, is experiential. It is internal and it is the sense we give to things. There is a great deal of interpretation and is thus more individual and more personal. 2+2=4 is a procedure. But the meaning and the sense of putting two and another two objects together is a process. In the current examination system, there is little scope to understand whether the child has crammed the procedure and is demonstrating that or whether the child has really understood.

Procedures are visible and external. You can see the procedure but not the process. So a process driven education scares insecure parents who want to see results. In temporal terms, the process can take much longer whereas a procedure is learnt quickly.

Procedures are mechanical. They can be applied mechanically without any understanding. Procedures can be taught to masses but a process is personal and individual. It is the internal understanding of a concept or phenomenon.

There was a study done in Brazil where a group of researchers studied street children selling coconuts. They purchased the coconuts, gave the money and asked for change. Then they asked for more coconuts and asked how much it came to.

Some children added smaller units successively, some added the even numbers and added the remainder at the end arriving at the correct result. Their result was correct but their process was different.

These same children were given basic training as in a formal education system. Then the same calculation in the form of a formal sum was given to them. Many could not do it and the rate of success was low. Yet it was the same sum. The reason for their failure was that they were not familiar with the procedures. They could calculate but not follow the procedures. So such children would fail in a school system, right? (Conversely, I assume, school children would not be able to deal with selling coconuts without making computing mistakes).

The procedures can vary. For example, the French divide in an opposite way as compared to the English. Vedic maths would have different procedures and children in China would learn yet different procedures. Yet, we fail children for making mistakes in a contrived procedure. Even in other domains, for example, in legal systems or even getting a visa, if procedures are not met, the file is rejected. That is why good universities are flexible. They take a meritorious student even if there is a gap in the admission procedure.

Focusing only on the procedures means we view children as machines instead of complex, feeling, thinking and enriching humans.

—Anju Musafir is founder of Mahatma Gandhi International School and a teacher trainer with a passion for teaching/learning.

** This facility is available for Indian callers only